October 5, 2014
Handed out samples of Grapevine issues. Discussed about each group selecting a Grapevine representative and ordering copies to be sold, donated and/or given to members.
August 3, 2014
Good meeting with six people. Discussed new literature, the 75 th Anniversary Edition replica of the first AA Big Book; and a new book Daily Quotes.
June 1, 2014
No report.
April 6, 2014
No written report provided.
February 2, 2014
No meeting or report.
December 1, 2013
No meeting or report this assembly.
October 6, 2013
No meeting or report this assembly.
August 4, 2013
No meeting or report this assembly.
June 2, @013
Had a good Grapevine meeting with several people attending we discussed the idea of display holders that can be bought or made for meeting grapevine reps to display the grapevine on the chairman’s desk. Any ideas would be greatly appreciated.
April 7, 2013
Having had what we on some occasions call a “moment of clarity”, I realized that being the Grapevine Chair meant more than showing up at IntraArea meetings. It means to promote Grapevine whenever possible. I went to several AA meetings in a large area of mid-Michigan to sign up groups for group subscriptions. I did not have much luck. Therefore I am asking this body if we could do this together. Please go to your groups and ask them to subscribe to the Grapevine.
February 3, 2013
Six people attended. History of the Grapevine discussed. Committee primary purpose state, which is to ensure that all members of Alcoholics Anonymous have easy access to the Grapevine.
December 2, 2012
"Mark W. and I had a small Grapevine meeting and admired the nice display that the previous chair left. We discussed who to nominate, but found out that since I had offered to be the temporary chair in Bay City, that I would be the new Grapevine chair by acclamation. I am honored and will serve my term in the most humble manner I can muster."
October 7, 2012
No report.
August 5, 2012
No report.
March 25, 2012
Please bring old Grapevine copies to the next CMIA 32 meeting to distribute at the State Convention. Remember, Step by Step was published by the AA Grapevine Inc.; each chapter of the book covers one of the Twelve Steps. The print subscription numbers for the Statewide challenge are available, the digital subscription numbers are not yet. Grapevine New York has moved in with the GSO.
June 3, 2012
No report.
February 5, 2012
Subscription cards were distributed and the Statewide Grapevine Challenge continues, as subscriptions are at a low. Remember to buy them for sponsors or sponsees or for friends' anniversaries. The committee's display was present at a workshop in Midland and possibly will attend the Statewide Corrections Workshop on May 19th. Step by Step is a new book, which allows the reader to understand the Twelve Steps through personal stories.
December 4, 2011
Subscriptions in Michigan are at a low; please spread the message. One fundamental way is to have literature present in meetings. The 2012 Statewide Challenge was discussed, fliers for which are on CMIA 32, District 8, and District 10 websites.
October 2, 2011
The CMIA 32 Grapevine Committee was allocated $300.00 to purchase 10 subscriptions within the Area. The committee has more information for GSRs to take to their groups. There are two more books in print – Emotional Sobriety II and Step by Step.
August 7, 2011
The committee has gotten more effective response from Grapevine, NY through email than by telephone. At the DCM meeting, Stacy distributed information for them to pass on to their groups at District meetings regarding Grapevine representation; only Districts 2, 4, & 12 have Grapevine Reps. A complimentary display package was sent from New York for CMIA 32 and the State Convention. At the Convention, the "Wizard of Booze" skit will be Saturday at 11 am. (There is an opening for the part of Aunt Em.) Also two tables will display Grapevine material, including books for sale, working with Area 34. Adelia H. & Jean S. registered to be Grapevine Reps. Please contact Stacy with any questions.
June 5, 2011
Six participants talked about using The Grapevine as a tool in our spiritual kit. By next CMIA meeting, Stacy will meet with DCMs to determine how many Grapevine reps are in the districts, plus to provide subscription forms to get passed back to the groups. At State Convention, The Grapevine skit will be on Saturday, 8/13 at 11 a.m., and called "Wizard of Booze." We need costumes and participants!

The Grapevine committee is a valuable instrument for communication between the Grapevine and the fellowship. It also brings grass-roots opinions to the Grapevine staff so they can better serve A.A.

The A.A. Grapevine magazine, "Our Meeting in Print", has recently published two new books, Step By Step and Emotional Sobriety II. Order these and other publications at the "Grapevine Store" or purchase from the CMIA32 literature table. 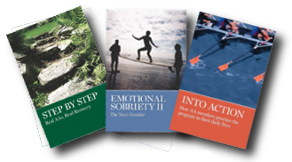